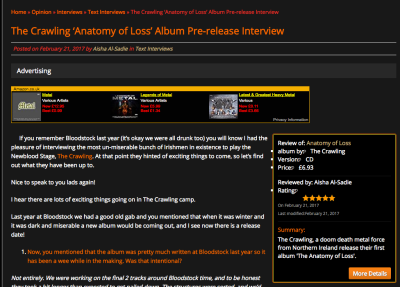 If you remember Bloodstock last year (it’s okay we were all drunk too) you will know I had the pleasure of interviewing the most un-miserable bunch of Irishmen in existence to play the Newblood Stage, The Crawling. At that point they hinted of exciting things to come, so let’s find out what they have been up to.

Nice to speak to you lads again!

I hear there are lots of exciting things going on in The Crawling camp.

Last year at Bloodstock we had a good old gab and you mentioned that when it was winter and it was dark and miserable a new album would be coming out, and I see now there is a release date!

Now, you mentioned that the album was pretty much written at Bloodstock last year so it has been a wee while in the making. Was that intentional?

Not entirely. We were working on the final 2 tracks around Bloodstock time, and to be honest they took a bit longer than expected to get nailed down. The structures were sorted, and we’d been playing them live; but when it came to sorting out the nitty-gritty stuff, the final version just didn’t sound right. We fucked about with a few things, and ultimately got it sounding perfect – but fuck me, did it take us a while. Truth be told, we only got it sorted AFTER we tracked the drums on the album … the first time. I’ll just let that sink in. ha, ha, ha!

I love the title of the album-Anatomy of Loss. What was the inspiration behind that?

Thank you; we think it works very well. As with everything in relation to The Crawling, it was inspired by real life events. My lyrics are all composed as a result of personal experiences, or things I see happen to those around me, this album has been no different.

The title is in relation to the personal loss band members have experienced over the last 12 months, and ultimately how we dealt with it. Some tracks are very close to home; others are simply exploring how different people deal with grief. It’s like everything, with heightened awareness you see it all around you. I had plenty of inspiration to delve into the systems humans use to get through difficult times, or in some cases fail completely.

I also thought the little release video set on the beach worked well. Very artistic. How did you come up with that idea?

It was a bit spur of the moment. We needed a teaser of some description, and I really like the idea of using video. We’ve been using images and poster/flyer type things for years, but I think video is often more effective; so we thought we’d try it out. The beach thing came to mind pretty much straight away.

It sorta ties in with the artwork Travis Smith did for us (depending how you interpret the cover), and I liked the isolation it created. The sea is a strong force; humans are so vulnerable to it. The ocean is vast, unforgiving, and unpredictable – it just seemed to fit. Once we edited the shots, and put the music on, it all came together beautifully. There will be follow up to it in the future, but not for a while yet. Stay tuned.

The Crawling – Anatomy of Loss: How would you say it is different from your EP In Light of Dark Days?

The biggest difference is the pace. ‘In Light of Dark Days’ was only 3 tracks, and as a result it took a single, steady pace. We simply didn’t allocate enough time to create variation. It worked well over 20 minutes, but I can’t imagine a listener remaining interested for an additional 25.

It is from that point where the album takes over. Anatomy Of Loss, despite being centred on the more gloomy side of things, has a few tracks that pick the pace up, allow for variations, and include more riffage. We were also able to incorporate some clean guitars into the songs with accompanied vocal line, rather than using them as intro or transitional riffs.

It was challenging creating the variations, as for a while we were going down a path of writing 9-minute epics all the time. They sounded great, but you need variation in music, otherwise your ears become acclimatised and the music loses its impact. It happens all the time with me; I hear the latest ‘djnet-y’ track, and think “fuck me – this is brutal as fuck!” – 3 songs in, I’ve forgotten the guitars are detuned, the vocals are ultra low – the impact is lost. I need variation to create the highs and lows; I believe Anatomy Of Loss has achieved it.

Did you end up using any of Andy’s click tracks?

Christ, don’t talk to me. Recording, producing, mixing, and mastering your own album is a ludicrous idea, and I wouldn’t recommend it to anyone. As a result of the nonsense idea, it put me under massive amounts of stress (which is ridiculous – metal is fun right?), and I made a balls of certain aspects – namely the click tracks. We had them totally sorted, and then when I transferred them to Logic (the recording program we used), they got meddled with somehow.

In short, I didn’t re-check them. Stupid, stupid, stupid. When we began to track the drums, it became … challenging. Amazingly Gary was able to play completely in time to the oddest time variations known to man, however, a particular track didn’t work. It was a combination of factors, but we basically scrapped the entire album drum recording and started again. Gary was thrilled. Having said that, I did keep a couple of quirky time signatures in there as it created a ‘lift’ in certain sections. It’s subtle, but it’s there. It’s a trick I’ll definitely use in future!

Is it going to be dark enough on April the 7th for the release?

Is it ever dark enough? Actually, we live in Northern Ireland, so it probably fucking will. I had planned for a winter release 2016, but between the fuck up with tracking, numerous other issues I encountered, and the meddling PR people demanding 12 week lead times, it got pushed back. Now that the machine has started rolling, I’m actually glad though. It would have been detrimental to rush it. We have a long-term plan, and this album is just the start of it; but fuck me it is hard work.

Did you enjoy playing Limerick as much as you thought you would? You were raving about it at Bloodstock!

We did! It was absolutely brilliant! Siege Of Limerick is awesome at the best of times, but this year we got a slot on the main stage, and at a great time of day. It paid off. We had a really strong crowd, got a lot of heads banging along with us, bit of a mosh pit in the heavier sections (which always confuses me – I never envisage us as a mosh-y band! Ha, ha!), and sold some merch.

We also got wrapped up by 6PM, stashed the gear and proceeded to get absolutely hammered until 3AM enjoying Dead Congregation and more! Fantastic show, I highly recommend it; not to mention it’s FREE in! *sorry – that’s a lot of exclamations…

Where can we buy the album and tshirts and other The Crawling goodies?

Best place to get stuff is directly from our bandcamp page: https://thecrawlingband.bandcamp.com/ It’s totally secure, takes paypal, credit cards, and all that good stuff. You can pre-order ‘Anatomy Of Loss’ right now, and we have some nice bundle packages available too.

Any messages to your adoring fans?

And finally, do tell us about any shows coming up to support the album and what else we should be looking out for.

We have an album launch show in Belfast 8th April at The Limelight 2, and a Dublin show 29th April at Fibbers. Keep an eye for UK dates end of May, and European shows October time – they’re being booked as we speak.

We have some video plans afoot, so keep an eye on our YouTube channel as well.

With all the shit that has happened recently in the news since we last met up I bet you now have enough inspiration for two albums so we look forward to the next one! 😉

You’re not far wrong; but I definitely need a break before I put myself through this nightmare again! Ha, ha!

Thanks again guys, all the best!

Thanks for chatting with us, we appreciate the support and hope to meet up for more beers in the future.